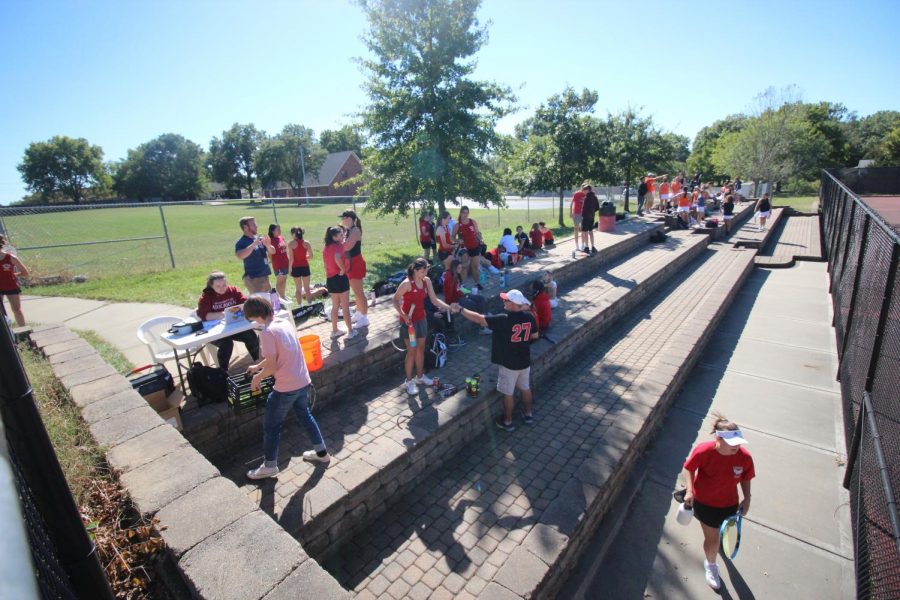 After a turbulent season shaken by COVID in 2020, this year’s girls tennis season has started with a remarkably high turn out.

Girls of all grades and experience levels have taken to the court this year to produce a team with a staggering thirty seven girls listed on the roster. This has resulted in some early success, such as a victory over St James Academy, but has also caused the team to have to take some interesting detours.

Head coach Chris Marshall and assistant coach Brian Hunter have been forced to change the way the team practices and perform at their highest potential.

“We met and decided that we wanted to make sure that everyone had access to courts and practices so we opened up A and B practice schedules and let them decide which days they wanted to go,” Hunter said.

The coaches have already seen issues arise from the overwhelming number of girls.

“It’s tougher to get to know them because there’s just so many of them and because we aren’t seeing them everyday,” Hunter said. “I know their names but I don’t feel that I know them beyond how they play tennis.”

Hunter looks to the rest of the season with cautious optimism.

“Obviously when you have more numbers you will have more talented players, but I’ve always said that the best way to get better is you’ve gotta play,” Hunter said. “Not having them play five days a week could hurt some of them but I think the ones who will work to get better would get better anyways, and the ones who are just playing for fun will have fun.”

Junior Allie Jakubauskas is one of many who continues to keep up with consistent practice. On top of this she views the influx of players as a big positive.

“It gives the team a lot more recognition with so many people playing,” Jakubauskas said. “I think it’s great to have so many people supporting just a bigger team, in general it is better for bonding.”

She attributes the surge of new players to many different causes.

“Honestly with COVID a lot of people switched out of their original sport, or they were more willing to try new things,” Jakubauskas said. “Also a lot of girls had friends on the team which made them want to join. It is really a combination of things.”

Jakubauskas does recognize that some challenges have arisen for the varsity players as coaches prioritize the newer players.

“I think the main negative is that the coaches have to split up their time so much,” Jakubauskas said. “It has affected varsity a little bit because it forced us to become a bit more independent.”

The challenge doesn’t stop at the varsity level, however. JV athletes also face their own kind of troubles.

“It’s definitely different because in prior years everyone has practiced every day but because there are so many people they have had to split it up into groups so only 12 or 16 people practice every day,” Landes said.

Transcending varsity and JV, the issue of less practice time plagues the whole team. The team still finds itself with a relatively normal team dynamic.