Home stands switch to east side of football stadium 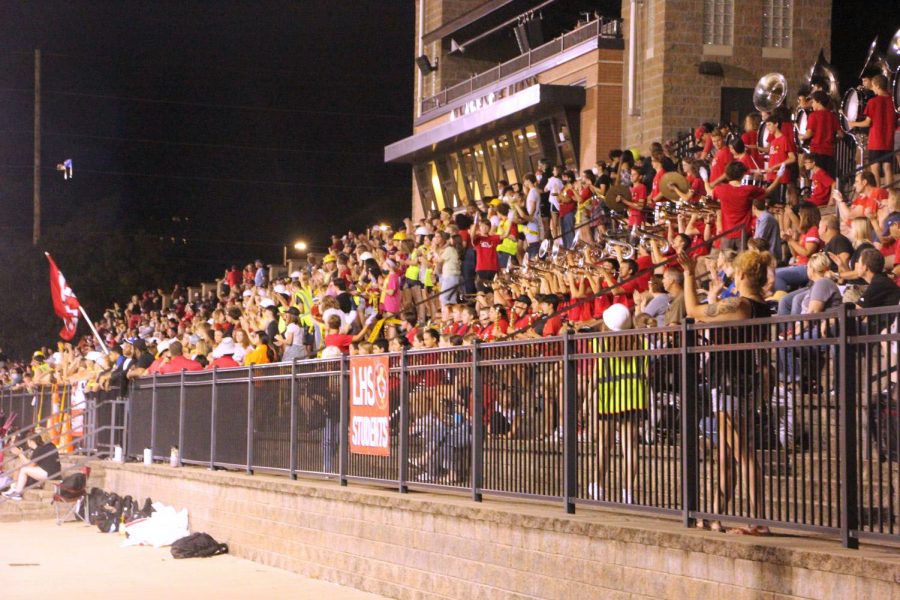 Fans pack the stands on the east side of the stadium during the football team's first home game.

When walking into an LHS football game this season you’ll notice a huge difference than past years.

Starting this season, the LHS football team, band and fans will be in the stands on the east side of the stadium with the press box.

While this is the norm for most football stadiums, it hasn’t been for LHS.

Lawrence High football’s history and tradition is the richest of any high school in Kansas and arguably the Midwest. This is because the Lawrence High football program holds numerous records, including but not limited to most undefeated seasons nationally with 32, third-most state championships nationally with 27 and the winningest football program in the state of Kansas and 20th nationally.

However, LHS didn’t have a stadium of its own until 2009.

Before the construction of the current stadium Lawrence High practiced where the current field is and played games at Haskell Stadium. Over the years, Haskell’s grass field was torn to shreds and in 2008 deemed too unsafe to play on. In an article with the Lawrence Journal-World in 2007, former Free State head football coach Bob Lisher noted that field “deterioration” had become a big issue every season.

“That field cannot take three teams playing on it. About halfway through the season, it’s getting pretty thin and torn up,” Lishner said.

The solution was to build a new stadium where the practice field was, but once again the school faced issues. Tradition says that a football field runs north-south, press boxes sit on the west side of the stadium or field and the home side sits with the press box.

And in most places, these traditions aren’t an issue. However, just behind the westside of Lawrence High’s stadium sits part of the Centennial neighborhood. Due to the proximity of the houses to the stadium, the Centennial Neighborhood Association (CNA) demanded that the plan for the stadium break the status quo and place the press box on the east side of the stadium.

After petitions, protests, lawsuits and litigation, the district and Lawrence High settled with the CNA and agreed to build the press box on the east side of the stadium, breaking tradition. But, the CNA made a key agreement to separate the home side (and specifically, the band) from the press box, as to not have the band blare music into the neighborhood while facing westward. After the construction of the stadium, everything was believed to be settled between the school and the CNA, Jeanne Klein, treasurer of the CNA said.

But with the hiring of Coach Bowen 12 years later in 2021 tradition was going to change again. Coach Bowen outlined his reasoning for the change,

“Several reasons explain why,” Coach Bowen said. “First, the home is on the press box side in football, traditionally. Through the years coming to home games, it didn’t seem right that our fans would walk across and sit on what is, traditionally, the visitor’s side. It just looked wrong. Number 2, there’s a competitive advantage when it comes to being able to look at the faces, body language, and signals of your opponent from the press box. You get a much better view sitting in the press box of who’s coming on the field, formations, and more. It’s simply a much better perspective for viewing what goes into every single play of the game.”

When asked about the neighborhoods surrounding LHS complaining about noise Bowen said that it was part of buying a house in that area.

“If you buy a house on a golf course, but you don’t want balls in your yard, you need to figure it out,” he said.

Senior football team captain Evan Bannister enjoyed how the home side looked on the east.

“It felt more packed than normal,” he said, “that was really cool.”

Tayte Markoulatos, a senior in the Marching Band, shared a similar sentiment.

“It was strange at first,” she said, “but the smaller stands made it seem more crowded. Giving the illusion that there are more fans showing up.”

“I personally really like the new side,” she said. “The student section felt more packed than normal, which made it more fun and exciting. I also like being closer to the PA system and speakers next to the press box.”

Band Director Mike Jones said it wouldn’t be his first choice, “but we had to make it work.”

“If it’s better for Lawrence High,” Jones said, “then it’s better in general. We made the adjustment, and it’s OK. But, just being there and having a normal football game was really enjoyable, even being on a different side felt much better than last year. It’s just one of those things where it’s not my call, so we had to adapt and it all worked out.”

When asked if he was aware of any agreements between the CNA and the school Jones said he had little information about the reasoning for the backwards stands.

“I’m not aware of the specifics, but I do know that there was very specific language concerning the stadium used in the settlements and agreements between them (the CNA & LHS). And that’s why the stadium is all messed up.”

Jeanne Klein said if the band was to switch to the east side, which it already has, it would “be a gross encroachment onto the neighborhoods westward of Lawrence High, and could possibly reignite the battles between the CNA and Lawrence High.”

But the administration has stood firm that the home team will stay on the east side for the remainder of the season.

“We will not be switching back,” said athletic director Mike Gillman.

Although it has presented some issues, administration and coaches have decided the advantage it gives to the football team is big enough to outweigh any costs.

“When you really get down to it, that competitive advantage is the biggest reason,” Bowen said. “The simple answer is: if there’s an advantage, however small the advantage is, we’re going to take it to win football games at Lawrence High School.”