Volleyball digs in for 3-2 win in season opener 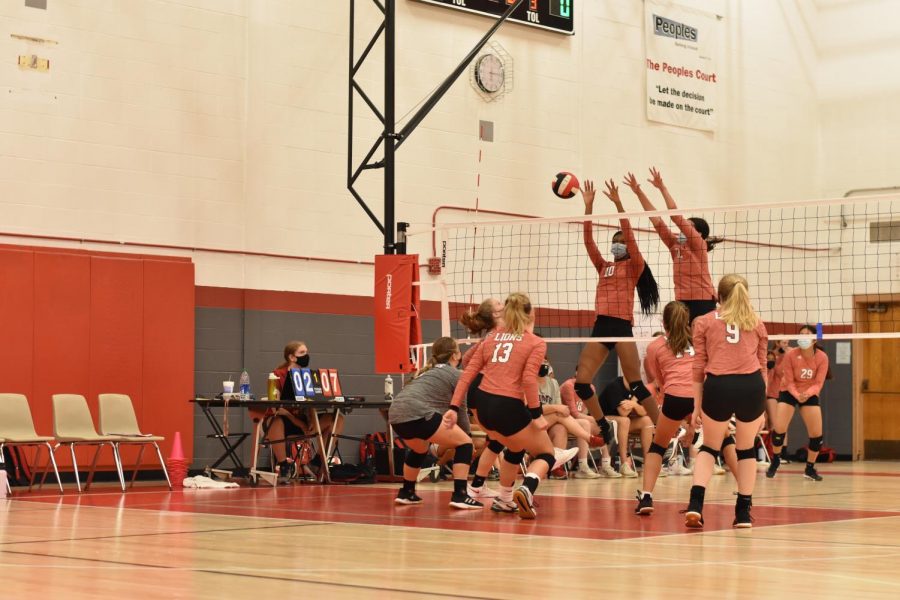 Lawrence High’s varsity volleyball team walked away from their season opening match at Blue Valley Northwest with its first win of the season, ending with a score of three sets to two on Tuesday, Aug. 31.

Senior captains Gianna Cooper and Emily Silvers led the charge against the Huskies, with Cooper recording 13 kills out of her 55 attacks by the end of the night and Silvers not missing a single serve out of her 25 attempts, as well as posting 33 digs in the match. Senior teammate Brenna Schwada backed up the team’s scoring effort, putting up all but two of the squad’s 32 assists.

The two teams went back and forth for the first four sets of the match, with each side claiming one of the first two sets by a score of 25-21. The Lions pulled ahead by winning set three with a score of 25-18. The Huskies rallied in the fourth set of the match with a 25-18 win, bringing themselves level with the Lions and setting up the final tie-breaking set.

The Lions hustled for a close win in the final hour, rallying for a 16-14 victory in the final set of the match and handing the BVNW squad their first loss in three regular season games.

The Lions scraped out the win on the offensive with the support of promising performances from sophomores Isabelle Waisner, Geme Ajekwu and Seenane Brewer, who combined for 21 of the team’s 39 total kills.

Senior Gianna Cooper was proud of the team’s effort in the match, pointing out the hustle of her teammates.

“We didn’t leave anything behind,” she said. “We put it all on the court.”

Co-captain Emily Silvers found strength in her squad’s teamwork, adding, “our communication and flexibility within plays was what really helped us.”

Silvers noted there was still room for improvement in the season but was hopeful and excited to put in the work.

“We have strong hitters, but I think utilizing all of them instead of relying on one or two would be a huge help,” she said.

The game marks the Lions’ first since their mandatory quarantine after suffering a COVID exposure earlier in the year. Silvers noted the difficulty of the experience but praised the discipline of her team in the face of adversity.

“We were missing half of our varsity team, and with only having eight people in total it made having practice with four very difficult,” Silvers said.

Despite the setback, Cooper added that she remained hopeful for the team’s potential and said the squad is looking forward to future opportunities to “mesh as a team and be as good as we can by the end of the season.”

Silvers agreed with her teammate’s sentiment.

“We are just working each practice to get the most out of them and play as a cohesive team,” she said. “We really just want to see improvement throughout the season and look back on every game knowing we gave it our all.”

The Lions will look to capitalize on their successful start at 5 p.m.on Thursday, Sept. 9 when they will take on Shawnee Mission East and Olathe East in a varsity triangular competition at Olathe East High School.