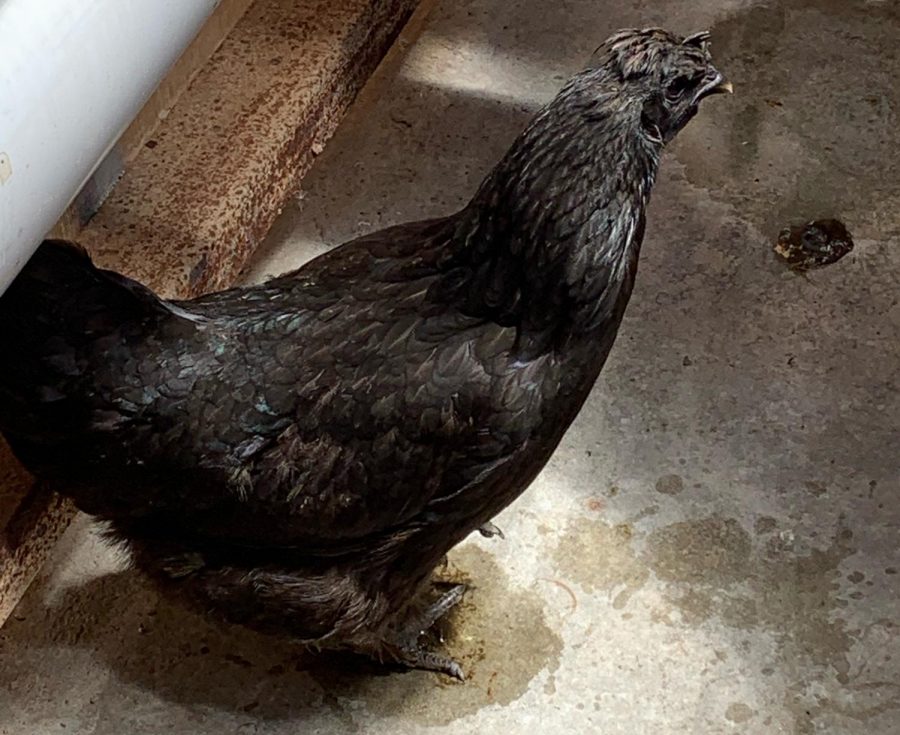 A prized ayam cemani hen was one of the chickens let loose inside LHS last month as part of a senior prank.

Agriculture teacher Sheryl Cleavinger-Perry was in the passing period between second and third hour last month when science teacher Victor Beckerman asked her to help secure three chickens that were loose in the hallway.

Cleavinger-Perry eventually caught the chickens discovered in the upstairs hallway — part of a senior prank.

Sophomores Jagger Tate and Maria Pollington, who saw the chickens roaming the hallway, said the chickens were calm but teachers near the scene weren’t.

“I was confused but I thought it was funny because… all the teachers were freaking out,” Pollington said.

“When I saw the black bird, I got excited and texted the farm to ask if we could keep it,” Cleavinger-Perry said “Introducing new stock on property is risky and we have to make sure biohazards are addressed. We had some solitary spaces, so we took the chickens in.”

Cleavinger-Perry said that her family has been involved in production agriculture since the early 1900s. During her childhood, her family raised pigs and planted and harvested row crops. Chickens have only been added to their farm recently, and they currently have about 100 free range chickens.

This prank occurred on Senior Appreciation Day — a day seniors had off school that’s known as a culmination to senior pranks. Science teacher Victor Beckerman said that compared to other senior pranks, this wasn’t unusual.“Pretty normal level,” he said. “Better than when they removed all of the desks from most classrooms and put them in the gym. Or when they piled tons of sand in E2 and turned it into a beach.”

The chicken’s were specifically found in the E4 stairwell. Cleavinger-Perry said that from what she saw there was either food or manure in the hallway.

“These chickens were not hard to catch,” she said. “They were very calm, and I’m sure they belonged to someone who loved them.”

The chickens were not loose long. After catching them, they were placed in the greenhouse by Cleavinger-Perry within 15 minutes of third period.

“I set the three birds up in the greenhouse with food and water, but they roosted in the rafters and nested in some of the flowers,” she said. “I also found seven eggs between the time they were found and they were taken to my family’s farm Monday morning.”

“Now, they are integrated into the farm flock,” she said. “Every morning, the coop doors are opened and the birds are allowed to roam the farm consuming insects in addition to their scratch grains.”

Next spring Cleavinger-Perry’s family will gather 40 eggs to incubate and hope for an ayam cemani cross hatch. For her, the prank worked out well.

“I was just the lucky recipient of three beautiful birds,” she said. “In the 20 years that I have been teaching, I have witnessed some pranks, but they were all in good nature.”