Choirs wrap up the year with in-person concerts 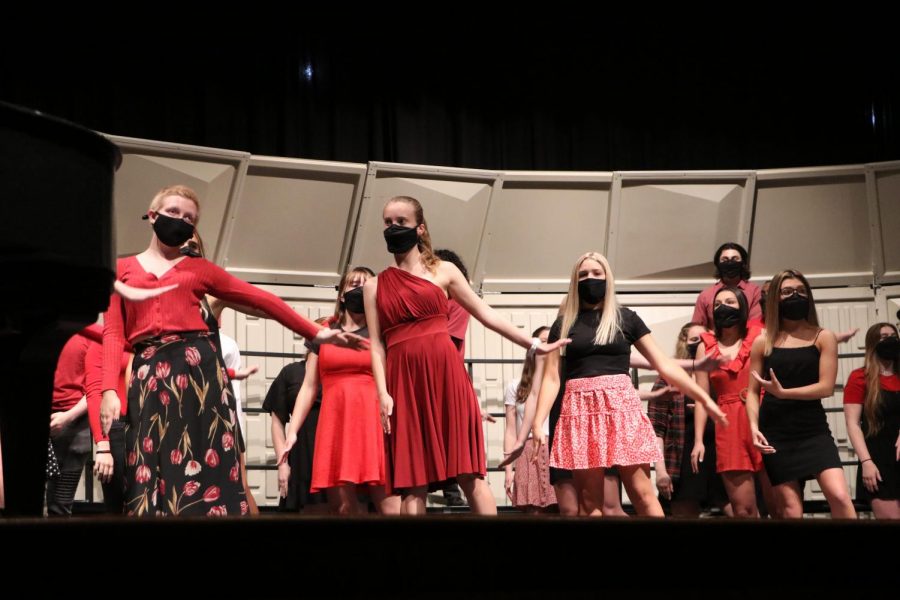 Choir members returned to the stage to perform a series of concerts starting in early May.

This spring, Lawrence High School finally held choir concerts at the culmination of a year of difficult changes in a pandemic world.

The concerts capped off a year in which students weren’t able to fully rehearse regularly and often joined classes from their homes. Getting back on stage brought a sense of familiarity and belonging to many in choir.

“The best feeling ever,” senior Analeesa Shawley said. “It was sad that it was my first and last concert, but I felt like I belonged to something for the first time in a long while.”

During most of the school year, students had to work hard to learn their music on their own while attending remotely. Many said that it was difficult to prepare for concerts this way, and equally as difficult to feel connected to each other as a group. Each choir had its own 30-minute concerts, whereas in years before there had been one concert with 15 minutes for each choir.

The decision to start having concerts again was a big one, but also important for all the choir members.

“Concerts are the culminating thing that we do — sharing the music that we have worked to collaborate and perform together with an audience,” choir director Dwayne Dunn said. “As soon as we received permission, I started planning how to make that happen for each choir student.”

Dunn has been the choir director at LHS for nine years, and it’s safe to say this has probably been his weirdest year yet. However, he’s adapted to the change and helped his students as well.

“We included some assignments that allowed students to share more about their personal musical side,” Dunn said. “It has been super fun for me to see their creativity and interests come out.”

As has been true throughout the past year, change has brought learning and adaptation for all.

“I now adapt to changes more easily than I did before,” Shawley said. “Perfectionism is my worst trait, and this year having everything planned was just not as easy.”

For students, having choir concerts again was a welcomed bit of normalcy and a chance to put into effect all that they had worked on during the year.

“Having a concert the past week felt really nice,”  sophomore Arbor Mulligan said. “It felt like a sense of normalcy and that all the work I put in for the year got to be showcased.”

Without normal concerts throughout the year, students were able to spend time learning more about other aspects of singing.

“I learned more about the science behind singing,” senior Ike Phillips said. “During the first semester, when no one was in person to sing, we did a unit on the voice and it’s components. I learned a lot during that time.”

Senior Sydney Delfelder said the time apart pushed her to do more to develop her music on her own.

“I feel like I have gained confidence in learning my parts and my voice. and when we do come together, I feel confident in what I have done on my own,” Delfelder said.

For many students, this choir concert was the last time they would perform with a Lawrence High choir. The ending to their high school career was bittersweet with the past year and a half of distance learning.

“It has been so hard walking away from choir,” Shawley said. “Music and singing is my home and comfort zone. The one place in high school I feel that I belong. Somehow I feel like I’m not done and that I have so much more to accomplish. I am happy that we had our final concert, but it feels incomplete.”

Despite the challenges of his senior year, Phillips said choir remains a highlight of his high school experience.

“Choir has been the most impactful aspect of my time at LHS, and I’m going to miss it deeply,” Phillips said. “Even though I plan on keeping music in my life one way or another after high school, I’ll always remember my time in LHS choir.”

Now, students have the chance to look forward to a more normal year next year.

“I am so excited for all of the concerts next year and to be able to share music with more people,” Mulligan said.