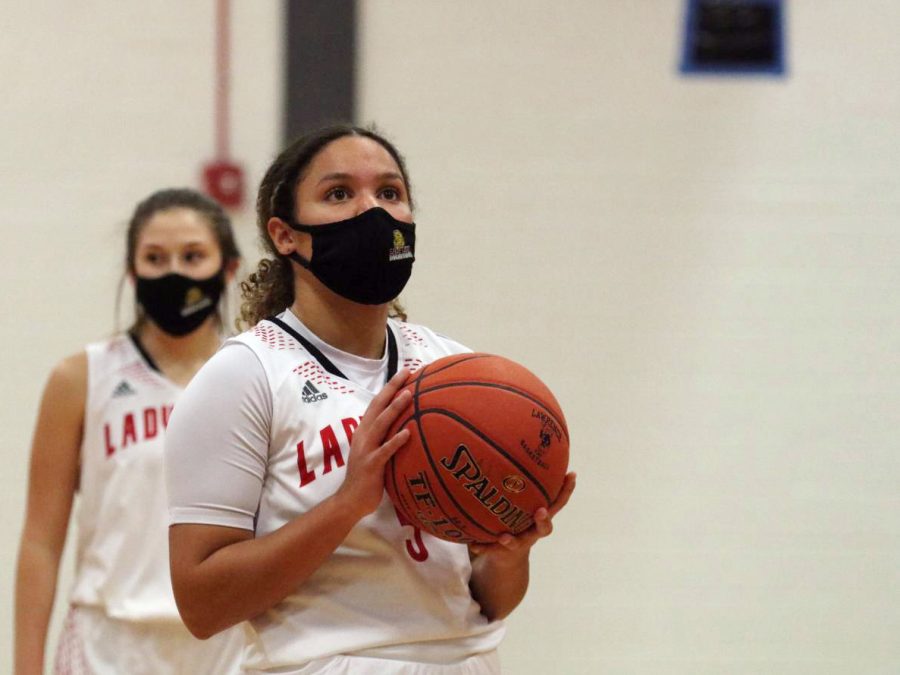 Preparing for a free throw, sophomore Amaya Marshall focuses on the basket during a home game on Jan. 12.

Amaya Marshall returns to the basketball courts better than ever, after a serious injury last season.

Midway through Marshall’s first Lady Lion basketball season, she suffered from a knee injury, forcing her to watch the rest of the season from the sidelines, and throwing her into a tough recovery.

Marshall sustained the injury after colliding with teammate Hailey Ramirez, both darting for a loose ball, at practice.

“All I remember from that moment was feeling two pops in my knee, and I knew it was something bad,” Marshall said. “I was immediately in so much pain, I couldn’t even move my whole body.”

After a trip to the hospital, it was determined she had a torn ACL and a partial tear to her MCL. The ACL and MCL are responsible for knee stability, causing this serious injury to be commonly associated with basketball.

“The day I told my team, I couldn’t hold back my tears,” Marshall said. “ It didn’t really sink in that I wasn’t going to be playing basketball for at least seven months until after I had my surgery on March 27th.”

“Amaya’s injury had a huge effect on our team,” head coach Jeff Dickson said. “We were devastated for her. Amaya works so hard and cares so much that it was extremely painful to watch her have basketball taken away from her.”

The team had an important role to try to fill in wake of her injury.

“It was definitely different, I felt like me and others had to step up vocally on the court and be stronger leaders,” sophomore Hailey Ramirez said.

To get back to playing basketball, Marshall had to go through a long and difficult recovery.

“The healing process was brutal,” Marshall said. “The beginning was definitely the worst because I had to start doing stretches and get my leg moving the day after I had surgery and it was so painful.”

With the support of her family and friends and an unwavering determination, Marshall made an astonishingly quick return to basketball.

“Amaya’s rehab has been incredible,” Dickson said. “ She has worked harder to come back than anyone I have ever seen before. She has been an inspiration to all of us. She is such a kind, caring, and awesome person who always puts everyone before herself. She is someone you always root for.”

Ramirez says is happy to be playing with Marshall again this season.

“She made the recovery, and I am so glad she is playing with us again.”

Since her recovery, Marshall has become someone the rest of the players look up to.

“She has been crushing it this season,” Dickson said. “ She is one of the best players in the Sunflower League, and she has a chance to be one of the very best in the Midwest. Her work ethic is second to none, and I could not be more proud of her.”

Marshall links her success directly to her healing process.

“Something that contributed to this year’s success was definitely staying consistent with strengthening my knee,” Marshall said. I knew that if I didn’t stay on top of it and work hard, I would never be able to play like I used to.”

The Lions are lucky and grateful to have Marshall back.

“We have a lot of great leaders on our team,” Dickson said. “From our lone senior Jayden Wilson to Layla Harjo and Serenity Keo, Hailey Ramirez and Lucy Hardy. And Amaya has the extra something great leaders have that makes others want to follow them. Who she is and what she does is admired by all in our program and our school. It is a sincere honor for me to get to coach her.”

Through this journey, she has uncovered a silver lining.

“Being injured sucked but a lot of good came out of it too,” Marshall said. “I had a whole new appreciation for the game of basketball and it made me realize how much I love it. I now realize how important it is to cherish every moment on the court.”