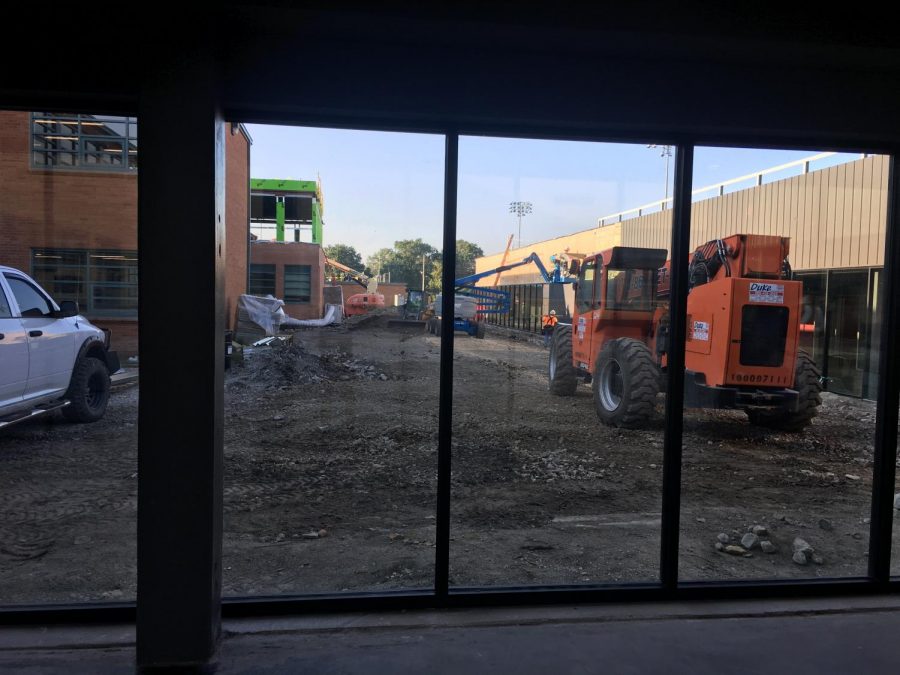 After an extension of summer break, students were welcomed back to an unfinished school.

McCownGordon Construction started on Lawrence High’s $46 million reconstruction project this summer as part of the 2017 voter-approved bond issue. According to design director CJ Armstrong, about a quarter of  the 70-year-old building’s architectural documents were missing, leading to some unexpected roadblocks heading into construction.

“We had a rough idea going into it how the school was built,” said Armstrong, an architect with Gould Evans. “There were just parts that were a big question mark and until you dig into it, you won’t really know what you have. We had to reverse engineer how do we think they built everything.”

Question marks soon became problems as walls full of asbestos were uncovered and major structural flaws had to be fixed, forcing redesigns and a pause while asbestos was removed.

Some problems, however, were unavoidable. Westar Energy diverted resources to disaster relief following the tornado in late May, which impacted their ability to do needed electrical work at the school. Heavy rains also postponed work several days.

“We encountered a lot,” McCownGordon senior project manager Brian Roth said. “When you build a project like this where you are renovating an existing space… it’s little stuff that adds up, unforeseen items.”

With the construction process lagging behind, the district pushed back the first day of school by six days to Aug. 21.

“Unfortunately, despite the best efforts of all those involved, we need extra time to deliver on our plans,” Superintendent Anthony Lewis said a letter announcing the delay.

Delays continued and instead of extending summer break any longer, the school year started despite 36 classrooms being unfinished. To deal with the shortage of rooms, various measures were considered, including busing students to nearby Centennial School for some classes. However, safety and a secure campus were core objectives of the reconstruction project.

Instead, teachers had to make use of the limited space left. All of it. From the gym to the auditorium, classes were packed into unconventional locations.

Some teachers did not get their own space at all, instead having to move from room to room each period. Many could be found working in the library during their planning periods.

Having to carry around all his teaching materials from class to class compelled debate coach Jeff Plinsky to go fully digital.

“It was stressful, but that wasn’t unexpected,” Plinsky said. “You move forward and do what you can do.”

As construction wrapped up in the 36 missing classrooms, teachers were given a day to move in while substitutes taught their classes. Although substitutes filled-in during the day, many teachers still had to prepare their rooms during the weekend without pay.

After a permit for student occupation was acquired, students were welcomed to the new classrooms on Sept. 11. Much still remained unfinished in the new area, including the hallway floors and paint.

The financial cost and stress caused by the delays raises the question of McCownGordon’s responsibility. The construction company is contractually obligated to cover any damages endured by the district as a result of delays.

The extent of McCownGordon’s obligation is likely to be worked out later this month, according to Roth.

“Our staff will gather records of any costs incurred as a result of the delay and work with construction partners on reimbursement,” executive director of communications Julie Boyle said.

The project is expected to wrap up in August 2021, according to plan. However, frequent interruptions have already thrown the aggressive construction schedule into question.

“It’s aggressive but do-able,” Roth said. “We may rethink how we do some of the other phases. Ultimately, it’s a matter of getting in, busting down on the schedule and fitting it in the box.”

According to Roth, many workers are putting in around 70 hours a week, working from dawn to midnight. Time will surely be on McCownGordon’s mind while pushing to wrap up phase two of the project during winter break. Phase two includes connecting the annex to the main building — work that students can already see and hear from the newly opened classrooms.

“Students are the reason I do this,” said chemistry teacher Victor Beckerman, who spent his first couple weeks teaching in the gym lobby. “So as long as students can get in here, we can get started learning.”