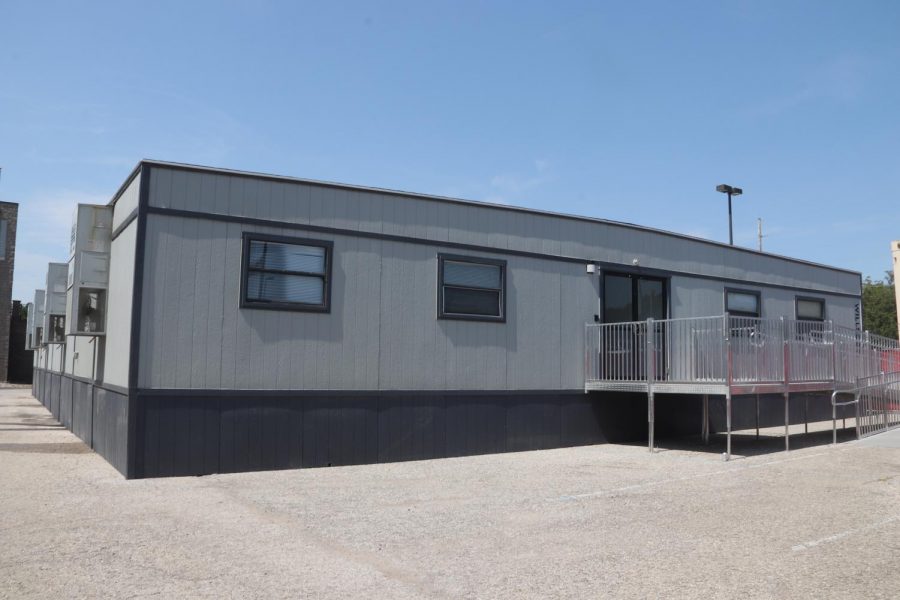 Due to this major project, many teachers have had to move their classrooms to other parts of the building. One spot you’ll see many teachers would be in the portable classrooms on the North Lot.

When asked what the biggest challenges were about teaching in the portable classrooms, each teacher agreed that bathrooms were a necessity, as well as other things.

“Some of the specific challenges are not having a bathroom or water fountain in our building, not having our own light switches in each room, not having enough room in my classroom for all of my students,” said Kimberly Hawks, the business teacher.

Julie Oswald, a math teacher, agreed that bathrooms were needed.

“BATHROOMS! Having bathrooms would help both students and staff. I would also like to add permanent whiteboards. The portable ones we have right now are hard for students in the back to see since they sit so low,” Oswald said.

Wayne Rush, another math teacher,  believes the classroom need more white board spaces, since it is such an essential part for a math classroom.

“Being a math teacher with no white board or a lot of white board space is a challenge sometimes, but again this year is all about modifying and adjusting,” he said. “In addition to closer classroom, and I’d also like a copier out here. It would certainly be a lot easier to not have to walk all the way to the building to make a copy or just to grab something off the printer.”

Hawks says adjusting to the portable classrooms have been not only a struggle for the teachers, but also the students.

“I knew when I was hired last spring that I would be teaching in a temporary classroom probably for the first and or second year that I would be here,” she said. “It’s been a challenge for me because everywhere I move I’m running into students and they’re running into me.”

Oswald has adjusted well to the classrooms.

“Honestly, teaching in the portables hasn’t been bad at all,” Oswald said. “It was a little stressful at first, but now it’s the new normal. It has really helped that the school has done a great job of getting us everything we needed as soon as possible.”

“Honestly, for me, it’s not too bad. A previous job I had, I was in a modular classroom all year; so for me this is not much different than what I had in the past” Rush said.

Hawks is concerned about the lack of locks in the portable classrooms.

“One of the things that we can’t do, and I know it sounds weird, but we can’t lock our individual classrooms.” “It’s a safety concern if there was an intruder or anything going on,” she said. “I can not keep kids safe in here, and it’s also a security issue that the different items I keep in my classroom can’t be locked for safe keeping”

Hawks was not the only teacher concerned about the inability to lock personal classrooms.

Oswald, on the other hand, is concerned about the amount of time given to students to get in and out of the portable classrooms to their other classes. She also points out issues that might be a great concern as the school year proceeds.

“The rain has been an issue in the last week. It has created a lot of moisture in the classrooms with some rooms leaking and with students getting caught in the rain/bringing water when they come in,” Oswald said.

As the school year proceeds, teachers will continue to adjust in order to make the most of their current classroom situations.

“Here in 2-2 ½ years we’re going to have a school we will be really proud of. It’s just that it’s part of the growing pains you have to endure you know.”