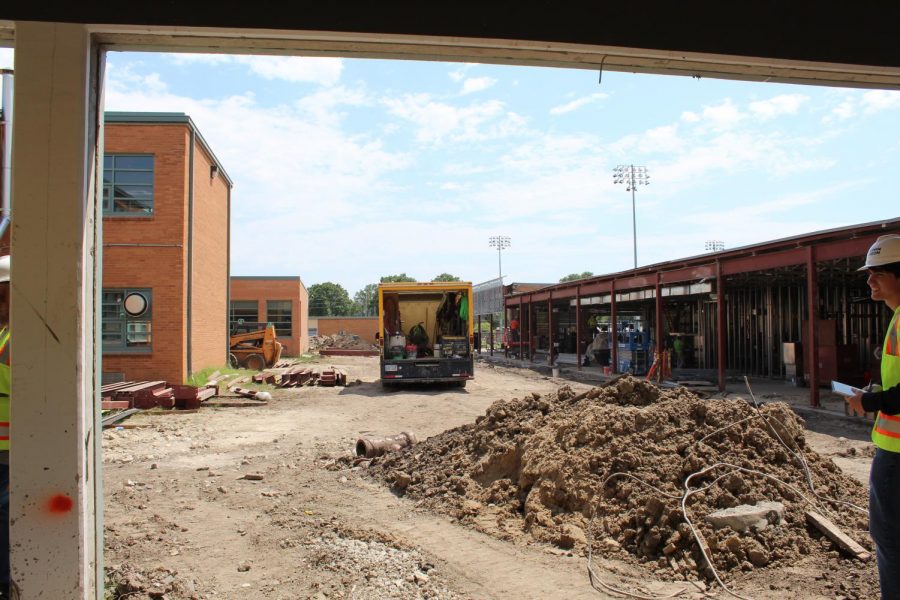 Since the building was constructed in 1954, nearly a dozen remodellings have attempted to keep up with Lawrence High’s rising population.

This has resulted in what CJ Armstrong, a leading designer for the building’s $50 million overhaul, dubbs a “patchwork” of designs.

“Never before was it cohesive, put-together,” Armstrong said. “We want to unify it as a cohesive design thought.”

District administrators and The Budget last week were given a tour of the current construction progress, a first look for even interim principal Cynthia Johnson.

As Armstrong repeatedly emphasized the guiding design philosophy of transparency, about 85 workers were building onto the now gutted Lawrence High.

Replacing a tangle of dead-ends, the new building’s gridded hallways will loop into themselves. Where the annex will connect to the main building, natural lighting will brighten the glass-lined hall.

The length of some new hallways, such as the one stretching from the annex to the auditorium, will allow a line of sight fully across the building.

Fire partitions will bring increased safety to the outdated buildings by preventing flames and smoke from spreading while still allowing movement through in the case of a fire.

With glass windows into the halls and updated exterior windows, classrooms will be opened up to allow more natural lighting. In the new art wing, a glass corridor will make rooms, according to Armstrong, “a display case unto themselves.”

A rolling shelf, provided to each classroom, can easily be used to cover the window to the hall in case of emergency.

While the new layout encourages openness, teachers will have more control of their rooms than ever before.

Variable refrigerant flow systems gives each room its own temperature controls. Although some rooms may receive more sunlight or are nearer to exterior doorways’ air flows, temperature can remain consistent.

All rooms will also be fitted with LED lighting systems that allow for several levels of brightness.

Soundproof walls means one class can take a test in silence while the neighboring class watches a loud movie or students pass to lunch in the halls.

“Short of someone screaming,” Armstrong said, “it is acoustically isolated, dead.”

Twelve labs and six co-lab stations will litter the halls in between rooms, decked out with furniture and space for students to separate from the class and work independently or cohesively with other classrooms.

These stations are more than familiar for Johnson, who has seen them in action in both middle and high schools.

“They are so excellent to develop the best environment for learning and real life,” Johnson said. “21st Century design, designed for students to work together.”

Shared resources such as printers will also be in open spaces between classrooms.

Getting lost finding a restroom will no longer be a problem, explained Armstrong.

Building codes require a set number of male and female restrooms, but Armstrong believes as the law progresses, the restrooms will be easy to transform as gender-neutral.

Eight single user restrooms with locks will be scattered across the school for faculty use.

While the Latin courtyard is bulldozed, three new courtyards take its place across campus.

Each courtyard will be naturally decorated with tall grass and Aspen trees. With tables and benches, the courtyards can be used for anything from eating to studying.

All courtyards have secured perimeters and will only accessible through the main building.

Although the multi-million dollar redesign project aims to bring Lawrence High into the 21st century, students will have to wait for that grand image to be fully realized.

Students will begin the fall semester greeted by a tangle of fencing that separates them from ongoing construction. Phases of the project will center around each semester, meaning major work should not interrupt regularly scheduled classes.

Construction that continues throughout the year, however, will be separated from active classrooms by solid walls within the building.

“This is a large project that touches every part of the school,” Armstrong said. “Students may see and hear some construction happening outside or in other parts of the school.”

To cope with that, Armstrong said students and faculty will be regularly included in discussions on the construction process in which specific complaints about noise can be addressed.

Armstrong says the project, aimed to be completed in the summer of 2021, is on track for time and budget. With 38 subcontractors and around 85 daily construction workers, there will be plenty of upgrades finished for students in the 2019-2020 school year. According to Armstrong, half of classrooms are expected to be newly finished and ready to use.

Correction (7/23/2019): This article incorrectly stated that single-user restrooms would be open for anyone to use. The district has clarified with Armstrong that they are, in fact, reserved for faculty usage only.