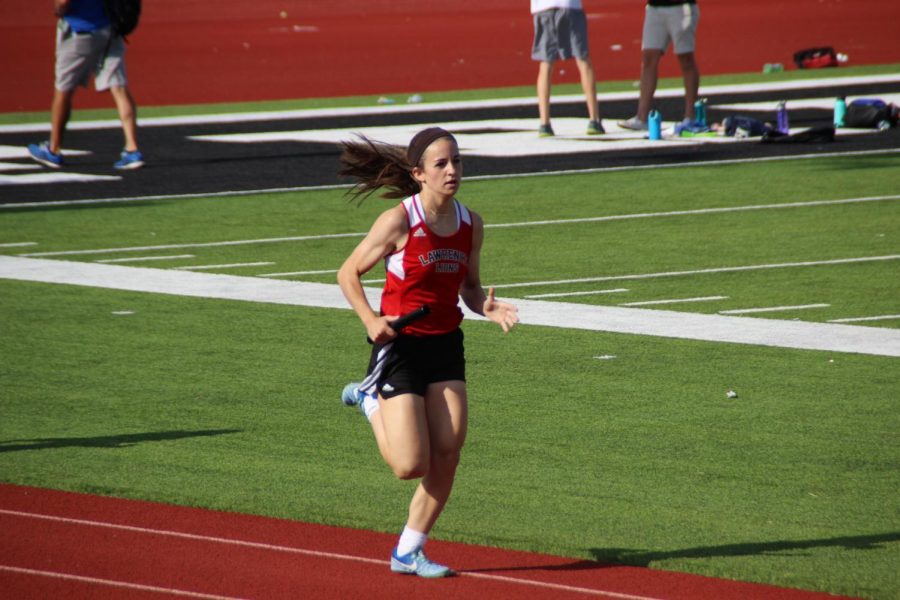 The state champions are back for more.

The Lions end track and field regionals at Free State toting a first-place plaque. Many of the same runners from last year’s state win have returned to score 155 points, leaving runner-up Gardner-Edgerton in the dust by a whole 50 points.

Back-to-back league and regionals gold have set the girls up with confidence for state next week.

Sprint events led the team on Friday with three qualifiers in the 100-meter dash, and two in the 200. The 4×100 relay team of Ashley Wildeman, Amaya Harris, Bella Kirkwood, and Asjah Harris finished first in 48.12 seconds.

Middle distance was no trouble for the girls, however, who snagged state qualifications across the board. Hannah Stewart and Evan Seratte took 3rd and 4th in the 800, respectively. The 4×400 relay of Harris, Stewart, Ozi Ajekwu, and Seratte took another first place finish with a time of 4:06.83.

Harris quickly created a leading gap that held the Lions through the end.

“Those girls get the job done for me and make my job easier,” Seratte said. “I just have to hold it down and lock in that win for us.”

According to coach Victor Beckerman, a strong start will be essential to keeping the team motivated moving forward.

“We got to get the ball rolling,” Beckerman said. “We saw that last year at state. We got points early on and that energy snowballed. Somebody has to start by doing something we thought they couldn’t do, and I’m sure somebody is going to do it.”

That someone may just be Kirkwood, who qualified to state in all four of her events, including a second place finish in girls long jump.

Lawrence qualified girls in each field event but one. Harris took first in the javelin throw while Josie Hickerson placed second in both pole vault and triple jump.

The boys had some impressive qualifiers as well. Avion Nelson took the gold in the long jump and Dre Bridges finished second in the 100-meter dash.

Many of the same exact relay teams that took the state title last year are returning to compete for it once again with more experience.

“We are not done yet,” Stewart said. “This is just a steppingstone to state. We got to remember to be competing for each other every single race, every single event, and every single moment.”

Girls and boys track and field state will be held at Wichita State University on May 24th-25th.

Full results can be accessed at http://files.milesplit.us/live_results/353858/index.html