Students plan to travel to a new national forensics tournament 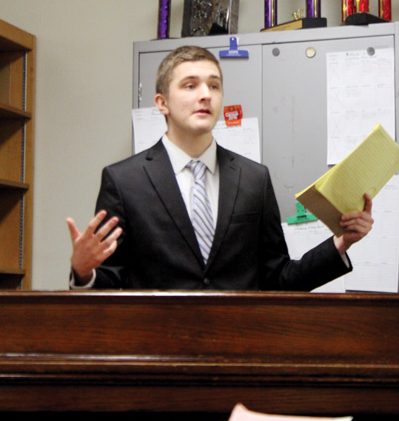 In May, nine Lawrence High students will travel to Milwaukee, WI, to compete in the National Catholic Forensics League tournament for the first time in recent years.

“It’s so weird, honestly,” Viloria said. “I’m still processing it, because this is my first year doing anything like forensics, and the fact that I am going to reach out to such a far tournament, it’s really cool.”

Riggins will be competing in the oral declamation category.

“It’s where you re-give a speech that someone’s already given, and so you try to give it as best you can,” said Riggins. “Really, you try to give it better than they did the first time, which can be really, really hard. The point is to really try to embody the original speaker as much as you can.”

Viloria and sophomore Joel Rose will both be competing in congressional debate.

“We do a mock session of congress, and we give negation and affirmation speeches, and pass and fail resolutions, just like the actual Congress does,” Rose said.

Riggins said that her forensics coaches proved to be strong resources for her.

“It’s one of those things where you’re super proud of it, but you know you can’t get there alone,” Riggin said. “I’m super proud of myself, but I’m also really thankful and proud of the work that I got from coaches and the ability that I was able to step up for a brand new event this year.”

Viloria was excited about the tournament, but anticipated it would be tough competition.

“I’m excited for the whole experience in general because I’ve never really done anything like this before,” Viloria said. “I think that it will be a really great learning opportunity in every aspect of it. I know that for nationals, it’s a big tournament and a lot of the competitors are going to be experienced people who have done this before, and I’ve only had a few tournaments to do it. So, I’m mostly scared for competing and trying to shape up to fit with the other competitors.”

“I think meeting new people and being able to compete against people who are from other places and all across the nation is going to be a really interesting opportunity, and I’ll get to see other people’s perspectives about topics, which is really cool,” Riggins said. “I think the stress is something that will definitely take me off guard, especially once we get there and we’re setting up. I think the challenge will just be staying really level headed about everything and not letting the stress take control.”

“We just have a lot of good speakers that can speak of the top of their heads as well as they are good with conflict in debate rounds and are really good with the line by line debate and the clash and just overall have a very diverse and wide range of skills with our debate team.”

Riggins said this competition will be completely new territory.