After qualifying for unprecedented fifth-consecutive state tournament, Lions are shocked in first round 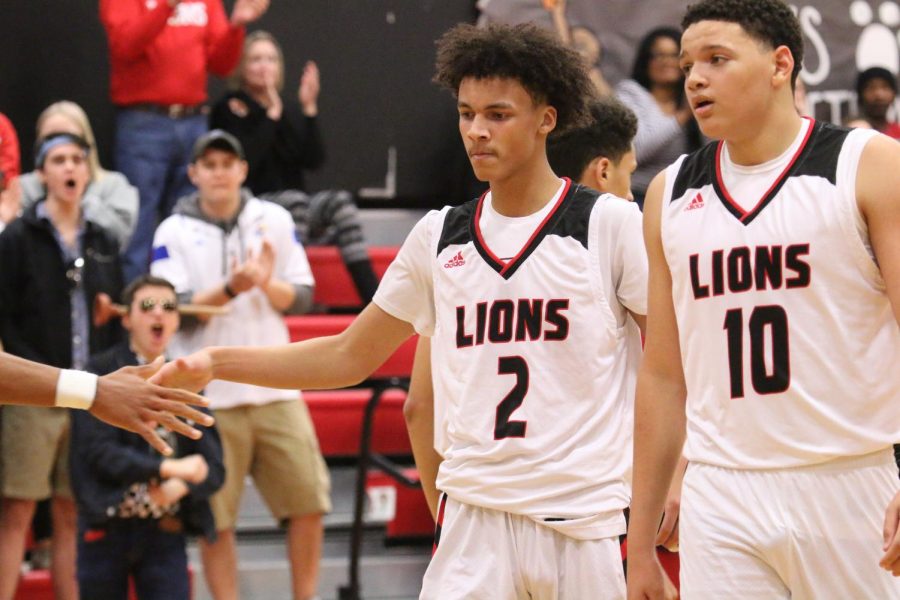 Sophomore Zeke Mayo reaches out to high five a teammate after a home victory. Mayo was named as the Sunflower League sophomore of the year.

Senior Clarence King took the shot to tie the game only to have the buzzer-beater circle the rim before popping out.

The Lions ferocious comeback streak in the second half of their game against Wichita Southeast was not enough to prevent them from being sent home the first day of the 6A state basketball tournament in Wichita. Fighting till the end, the boys ended an impressive season with pride.

For its fifth consecutive state appearance, the team came in with a 19-3 record, snagging the fifth seed. One of these wins was an unsparing 72-46 game against the very same Golden Buffalos they would ultimately fall to in Wichita.

“Basketball is anybody’s game,” sophomore Zeke Mayo said. “Whenever you beat a team by 20, you might automatically think you’re going to beat them again.”

The opposition had learned from last time. Trey Quartlebaum and King were closely guarded to make sure the Lions did not get any open shots.

Behind 32-30 at halftime, the boys knew it could go either way, and needed to make it past the Buffalo’s defense.

“I was thinking that since this could possibly be the end of our season,” senior point guard Trey Quartlebaum said, “I would go the hardest I went all season. I wanted to do everything I could to win, and everyone else had that mindset too.”

Just into the third quarter, Southeast managed to grab a 15-point lead before the Lions stepped up with sophomore Zeke Mayo and Quartlebaum within the last three minutes to narrow to a 50-48 gap.

The fourth quarter saw Southeast keep up the heat, leaving the Lions with only half a minute to bridge a six-point gap. They were not going to let the opposition win this game easily.

In the last seconds, King rebounded a shot from Quartlebaum and ran to attempt a triple to tie the game from 70-67.

“The last few seconds, it was a battle,” King said. “I was just telling myself, ‘Someone hopefully make this last shot.’ ”

With the season over, the first LHS champions of the Sunflower League were awarded several accolades. Most notably Mayo was sophomore of the year and Mike Lewis as coach of the year.

“Him winning that award is awesome to see,” Chapple said of Lewis. “He sacrificed hours upon hours into us seniors… It’s nice to see him rewarded with something he deserves. He made me a better man throughout the years he coached me.”

Besides an abrupt to an otherwise stellar season, junior Mayson Quartlebaum is only thinking about next year’s finals.

“We could have definitely gone to the state championship,” Mayson Quartlebaum said. “But we’ve just got to take it one game at a time.”