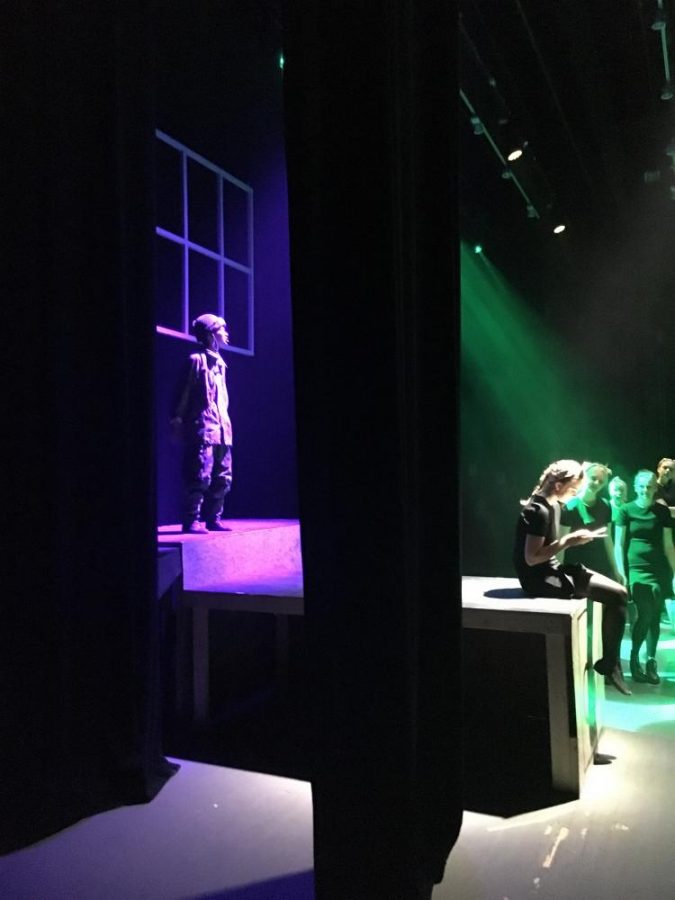 International Performer — Cast in purple light, junior Jalyn Banks stands on stage during a performance of “Everglow,” a play students wrote and performed during a summer workshop in Sweden. The play focused on the true story of a New Jersey factory in which women painted watch tiles with radium paint without knowing the dangers of radium. “So in this scene, one of the workers at the factory had been writing messages to soldiers on the glow-in-the-dark watches that they were sending to the front, and she got a reply, and the soldier who is Jalyn Banks, is singing a duet with her,” explained Julian Weslander. Photo courtesy of Jamie Johnson

Summer is often a time for relaxation, and for student actors, summer is a break from school plays. This summer, that wasn’t the case for the three students who traveled to Europe.

During the summer, theater teacher Jamie Johnson took three of her students to Oskarshamn, Sweden, to participate in a musical-writing workshop through a creative arts organization called Lovewell Institute.

“I’ve been participating in this workshop since I was in high school,” Johnson said.

They began their stay by brainstorming ideas for the musical as a group. For senior Liam Romano, this was the scariest part of the process — finding a balance between an idea everyone liked and being able to write it in time for their performance.
“For the first few days, we were kind of bouncing [ideas] back and forth and not really settling on anything, because a lot of different people had different ideas,” Romano said.

Luckily, they decided on a topic everyone liked: the Radium Girls. Working in a factory as watchmakers during the WWI era, they contracted radiation poisoning from painting with radium.

“We would all get together in either a big group or in smaller groups, and we’d all work on different aspects of the show,” junior Julian Weslander said.

They divided up jobs evenly. Participants would work on songs or scenes, then reconvene at the end of the day to update their peers on their progress.

“I felt really good about the songs I helped write,” Weslander said. “I really enjoyed listening to them, and I thought they were good songs.”

Writing the play was not only an educational experience, but a bonding experience as well.

“My favorite part was just meeting the people there,” junior Jalyn Banks said. “There were so many amazing people that I would not have gotten the opportunity to meet unless I went to Sweden.”

In the end, they performed “Everglow” for a live audience.

“It was actually really cool,” Banks said. “[A] thing that’s different is the audience…in Sweden. It was weird because you like bowed at least six times.”

Lawrence High has performed student-written plays before, but Romano said, nothing like this. Even now, music from “Everglow” still gets stuck in the cast member’s heads.

“The songs getting stuck in people’s heads, you know, still loving it even after, that was really awesome,” Romano said.