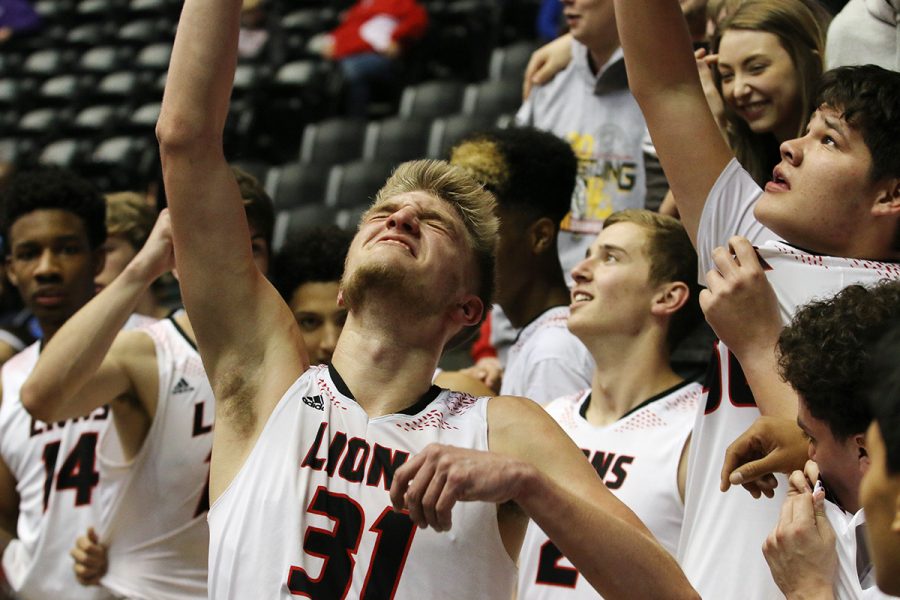 Fist in the air, senior Jackson Mallory celebrates the Lions semifinal win over Blue Valley North on Friday night at Koch Arena in Wichita. The Lions marked their third consecutive year in the tournament. They will play for the 6A state championship at 6:15 p.m. Saturday.

He went to the free throw line with the game tied, and stared straight into a crowd of Lawrence High students who made the trek all the way from Lawrence to Wichita’s Koch Arena. He toed the line.

His first shot went up, hitting the back rim and bouncing straight back into his hands.

A deep breath and a firm dribble into the ground, and Buffalomeat was reassured.

His second shot went up and dropped sweetly into the net.

His free throw gave the Lions the lead for good in a back-and-forth game that advanced the No. 7 Lions to the 6A state tournament final, winning over No. 6 Blue Valley North 41-36.

The game could not have started more dismally for the Lions, as two pregame technical fouls were assessed on Buffalomeat and junior Anthony Selden. After swishing all four free throws, the Mustangs hit their first jumper — a three pointer — and within 30 seconds already had the Lions on the rope, 7-0.

The Lions were not fazed, and gritted their teeth, determined to work their way back into the contest. Not calling a timeout, despite seeing their deficit grow to double digits, head coach Mike Lewis demonstrated the trust he had in his team.

“We just believe in each other,” he said. “I was joking, ‘Your neck gets score looking up at that big scoreboard, so just quit looking at it. Just play basketball.’ You’ve got 32 minutes. There’s going to be a series of momentum and streaks, and you’ve just got to settle down and play good ball.”

The Lions fought their way back by establishing a physical defensive presence. It came through for the Lions as they pushed the Mustangs into several turnovers on what could have been easy baskets, forcing two traveling violations and two offensive fouls in the first period.

Getting their feet wet first on defense, the Lions were able to transition their positive momentum to offense.

After two baskets from senior Jackson Mallory and sophomore Noah Butler, the Lions hit their first jump shot of the night with a buzzer-beating three by sophomore Clarence King to send the Lions into the second period down 13-9.

The Lions continued their strong play in the second quarter, only allowing the Mustangs to score four points in the period, led by the strong defensive play of Buffalomeat, who had two blocks and affected numerous other shots.

After another bucket from King, who lead all scorers with nine in the first half, Mallory gave the Lions their first lead of the game with a three-pointer one minute into the second half.

“It’s just a momentum builder,” Mallory said. “I knew I had to take it upon myself to do whatever I could to just help us get back up after being down four at the beginning. My teammates found me for an open three and I did my job and knocked it down.”

After battling back and forth, King, finished on an and-the-foul basket, which gave the Lions a 16-15 advantage.

Following another bucket from the Mustangs, Mallory hit his second three-pointer of the night and gave the Lions the advantage they carried into the second half, 19-17.

Coming out of halftime, the Lions continued their strong play to open up their lead to a more comfortable margin, after a rim-wrecking dunk from Butler, which forced a BVN timeout.

Out of the timeout, BVN reemphasized its defense, and play slowed down for both sides, stagnating the flow of the game.

Toward the end of the third period, the Mustangs began to speed their play up as senior Keilon Hunter, who led the Mustangs, drew several fouls and hit a three with two minutes remaining.

The Lions were quick to respond, seeing Mallory march into the lane and softly flip the ball over his head off glass to finish an and-one. The next possession, fellow senior Austin Miller had an eye-popping assist, driving right, jump-stopping back left and then tossing a no-look pass into the hands of sophomore Trey Quartlebaum.

The next possession, the Lions held firm defensively, not allowing the Mustangs to get a shot off, heading into the fourth quarter leading 28-20.

The Mustangs came out strong in the final quarter, scoring two early baskets to make it a two-possession contest. The next possession down, the Mustangs, shooting in the bonus as the result of early fouls in the third quarter from the Lions, finished two free throws, then another basket from Miles Emery, who finished the game with 14 points and seven rebounds. The game was tied at 29 with six minutes remaining.

All the momentum in the gym had shifted to the Mustangs, and the Lions were looking bleak.

Miller earned a trip to the free throw line and silenced the crowd by giving the Lions the lead again. The next trip down for the Lions, King was tripped up in the lane, but again finished through the contact, and this time completed the old-fashioned three-point play. The play after that, he stole the ball and outletted to Miller who put the Lions up by six.

Refusing to go away, Emery carried the Mustangs, scoring three consecutive baskets to tie the game with two minutes to go.

Coach Lewis called a time out.

“I just tried to steady them,” Lewis said. “That’s a crazy atmosphere out there for high school kids. A lot of emotion, a lot going on so as a coaching staff we just tried to keep them steady.”

Buffalomeat took charge, giving the Lions the lead. On the next possession, he cleared out from the left block, drew two defenders and gave Miller a clear lane to the hoop, which gave the Lions a three-point lead.

Holding firm, the Lions refused to give the Mustangs a clear look at the basket and forced several contested jumpers.

In the closing seconds, a King layup assisted by Mallory put the game out of question.

Shooting one final free throw, Mallory hit nothing but net and was ecstatic.

The Lions came out on top 41-36 and move on to title game tomorrow, against the winner of the Blue Valley Northwest/Free State game later tonight.