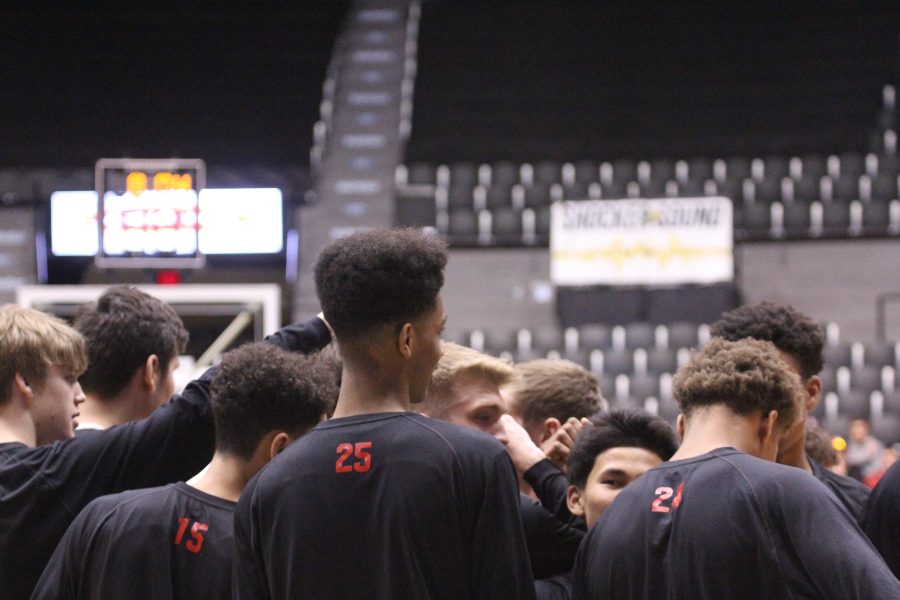 The Lions are facing Blue Valley North at Koch Arena in Wichita for the state tournament.

WICHITA — The seventh-seeded boys basketball team is taking on the sixth-seeded Blue Valley North Mustangs at 4:45 today at Wichita State’s Koch Arena, with a trip to the state finals on the line.

The Lions come into the semifinals after upsetting the No. 2 seed, Manhattan, in a nail-biting 51-44 overtime victory on Wednesday.

The Mustangs had a comfortable victory in their quarterfinal, defeating Olathe Northwest by a double-digit margin, 61-37.

The Mustangs come into the game, 17-6 on the year, but have turned it on coming down the stretch, coming into the game winners of seven straight.

Playing in the state semifinals for the third consecutive year, the Lions look to overcome their shortcomings of the past two years, and secure the state title that has eluded them.

To do so, the Lions, coming into the matchup at 16-7, are sticking to an inside-out approach, that has came in crucially for the Lions on their trip to Wichita. This approach has heavily featured senior Kobe Buffalomeat and sophomore Brett Chapple, who combined to score 32 points in the Lions’ win over Manhattan.

According to assistant varsity coach, Matt Stiles, the biggest challenge for the Lions will be keeping their composure.

They plan to overcome it by limiting what the Mustangs can do offensively, and letting the Lions feel out the game first.

“They’ve got two or three guys that they run all their stuff through,” Stiles said. “We’ve just got to try and limit them and force their other guys to beat us.”

Fans from LHS are already pouring into the arena in anticipation of the matchup. Filling the seats quickly, fans such as sophomore Andrew Severn are confident in the Lions’ chances of advancing to the championship game.

“I’m confident that the Lions will be able to advance,” Severn said. “I would say it’s about a nine out of ten that we will win.”

The winner of the matchup will face the winner of Blue Valley Northwest/ Free State which starts at 8:15 later tonight.