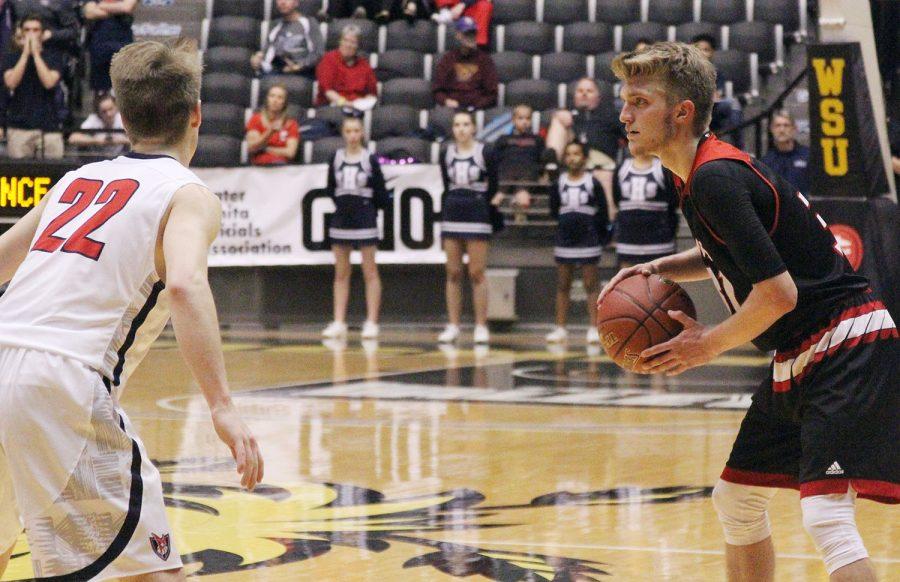 Senior Jackson Mallory scans the floor during the Lion’s overtime win over Manhattan High School on Wednesday. The win launched the Lions into the semifinals of the 6A state tournament for the third consecutive year.

By Meredith Chapple and Trey Hulse

The Lions beat the No. 2 seed Manhattan 51-44 at the state tournament on Wednesday. They will play Blue Valley North at 4:45 on Friday at Charles Koch Arena in Wichita in their third consecutive return to the state semifinals.

For some of the Lions, it was their first time playing at Koch Arena, which is a much different setting than the Jungle. Coach Mike Lewis said it is hard to know how the change in environment will impact a player.

“Until you’re out there on the floor and you’re in the moment, it’s really hard to tell how much that environment affects a high school kid,” he said. “As a coaching staff, we pretty much stay the course, but it’s a high pressure, big time environment for a high school kid.”

The Lions played powerfully in the first half, but had a lull in the third quarter, scoring only three points. The game was tied at the end and went into overtime. Eventually, the Lions came out on top.

“We came out strong at first, we played really well, great defense,” senior Jackson Mallory said. “Second half came and I don’t know what happened. But then overtime came and we got the dub [win].”

Mallory hopes that throughout the tournament, he can improve on ball-handling.

“Just taking care of the ball and not doing stupid things,” he said. “Not trying to drive when there’s five people in the lane. Doing easy things, getting the ball to the open man and not forcing stuff.”

Lewis said he is looking forward to the next game and being in the moment.

“Having another opportunity to play and coach the team and be around the team,” Lewis said. “Just looking forward to being in the moment and just embrace the Final Four and be proud of who we are.”

Check out our Soundcloud interviews with Jackson Mallory and Kobe Buffalomeat.