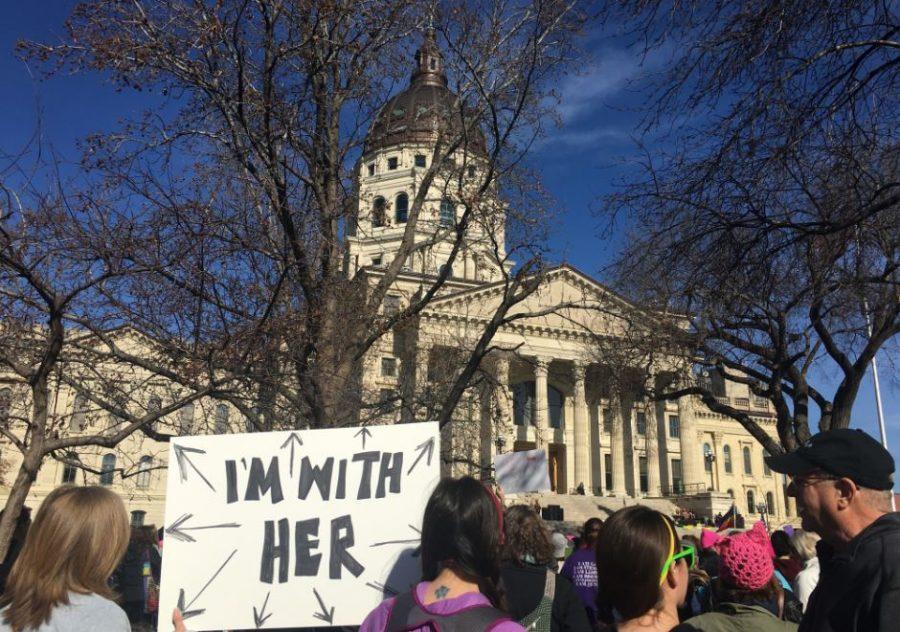 By Lourdes Kalusha-Aguirre and Anahita Hurt

The Women’s March took place across the country on Jan. 21. In Topeka, over 3,000 people marched at the Capitol building.

At the march, people carried signs and chanted. There were speakers and musicians.

People went for a multitude of personal reasons, although a common reason was due to an anger about the election result.

“Because with the election, there wasn’t a whole lot I could do because I can’t vote,” sophomore Malka Hampton said. “Just like any way that I could express my views was something to participate in.”

Many people who attended these marches and protests, have been seen in pink caps with points resembling cat ears, deemed ‘pink pussy hats.’ Their naming is due to their color, and the cat ears. They seem to be interpreted in multiple ways, and amongst those interpretations, there are a lot of varying opinions on them.

Sophomore Aidin Manning wore one. Her mother also made a few, which she handed out at the march. Manning thinks the hats are a positive symbol of feminism.

Manning thought it was empowering to see so many people coming together for something they believed in.

Speakers were a big part of the march.

“There were all different types of speakers there,” Manning said. “There was one lady there to speak about disabled people, and there was another one for Native Americans, and I think it just helped spread awareness about all the different groups of people.”

Teacher Claudean McKellip attended the march, and she also took an interest in the speakers.

“There was a speaker from Planned Parenthood, there were speakers on education and the status of issues in Kansas, the need for education funding,” McKellip said. “We had Stephanie Mott, who is a woman who is trans; she spoke kind of to the LGBTQA issues and the specifically of the bathroom bill, and the absurdity of that bathroom bill in Kansas and other places. Great bands played, we had one of our legislators speak, a mother speak, a great variety. A principal at Highland Park spoke about issues she has seen.”

What seemed to really resonate with McKellip was the amount of people, how caring they were, and their passion and motivation.

“I have been to other demonstrations, other protests in the same area, but I have never seen this many people at the capitol at one time, or any event, so that was different,” McKellip said. “There was a lot of comradery, there was a wide variety of people there, a lot of men there, a lot of women there, but it never felt packed.”

McKellip ordered a pink pussy hat, but the influx of orders caused her not to receive hers in time. She attended because she felt like they were all collectively together.

“I think maybe part of the political mission was to divide us on issues like gender or sexuality, but I think the impact was just the opposite,” McKellip said. “People are coming together more than I’ve ever seen before in a positive way.”