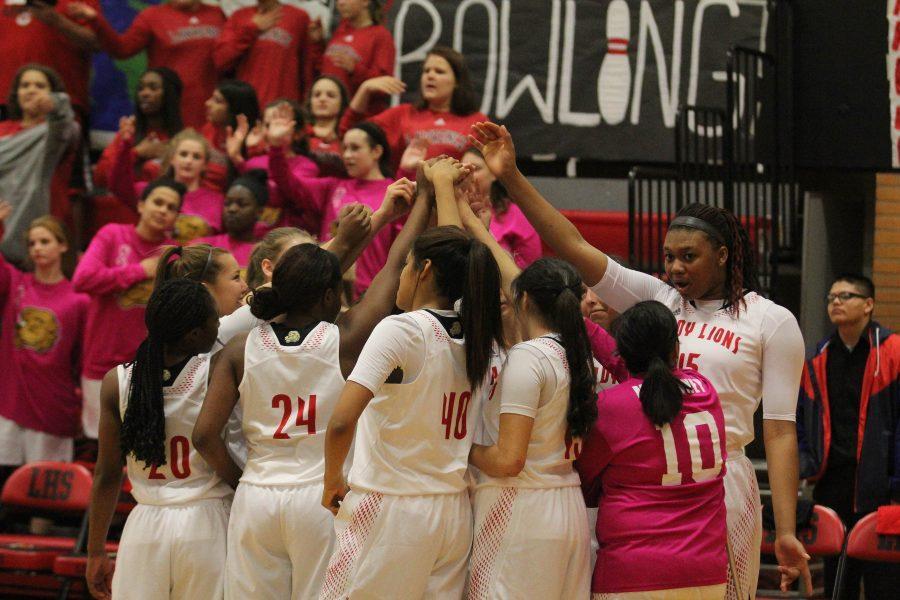 The Lady Lions will face Olathe South Thursday in the first round of the state tournament.

The Lady Lions opened up their season with a victory against the Topeka High Trojans.

Seniors Skylar Drum and Olivia Lemus led the way for the Lions, scoring 7 and 11 points respectively along their way to a 56-44 victory.

Despite a shaky start to the first half, the Lions managed to hang in the game. The nerves, according to Drum, were merely a result of the atmosphere playing in front of the packed home crowd.

“It’s a lot of nerves because we are playing in front of the home crowd and it’s really loud,” Drum said. “We can’t hear what plays we are running but it’s also partly because we aren’t exactly cohesive yet,” Drum said.

A strong run to the second quarter led by junior E’lease Stafford allowed the Lions to draw even and pull slightly ahead going into the intermission.

After halftime, the Lions were a whole new team, trapping early and often, and frustrating the Trojans into countless turnovers. The defensive intensity that the Lions played with, according to Drum, is what allowed the Lions to pull ahead for good.

“I think that when we picked up our defensive intensity and started scoring off our steals we were able to go ahead,” she said.

The Trojans attempted to cut the double digit deficit, but the Lions defense proved far too stout, and the team moved to 1-0 for the year.

The Lions return to action next Tuesday away to Topeka Hayden.