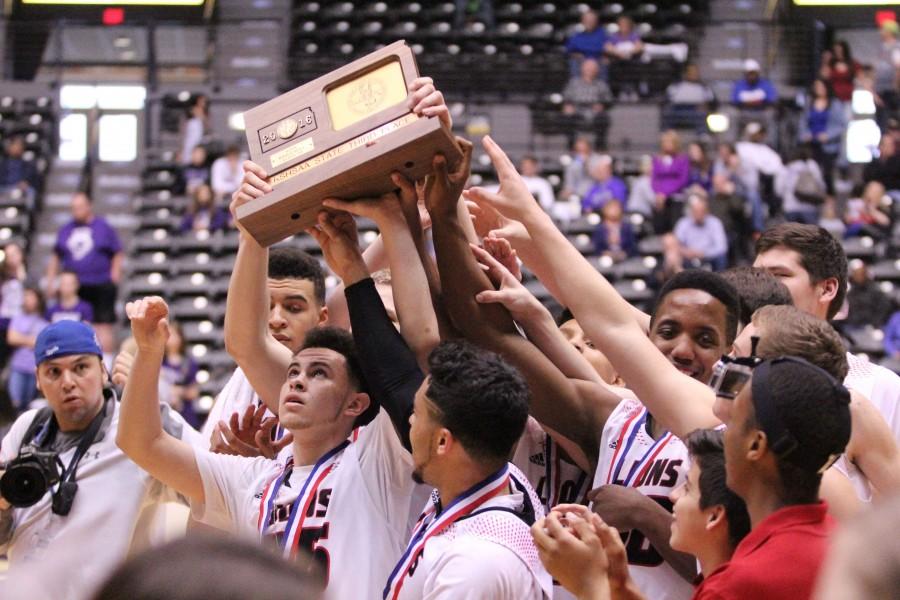 Raising up their third-place trophy, the boys basketball team finishes their season strong with a final score of 74-66 over Blue Valley Northwest. Pictured in the front is senior Justin Roberts.

WICHITA — The clock struck double zeroes and the heart of the Lions broke for friends, families, coaches and players alike.

No. 1 seeded LHS had lost to the No. 4 Wichita Southeast in the state semifinal game at Koch Arena in Wichita.

In a year of unprecedented success, a setback of this degree could be catastrophic for a senior-laden team with mere hours left in their LHS basketball careers.

Tears lined the path to the locker room, undoubtedly signs of the deep mourning for a lost state title dream, a dream that had danced in the minds of the Lions during the past two years.

Giving up all hope and folding over seemed like the easiest — the only option left for the Lions at this point.

In the darkest moment for a team — the team that had exceeded everyone’s expectations except its own — it would take something special to rise up and play one more game.

And all along, for a special team among special teams, they did have the critical edge to finish the dream, they just didn’t know it yet.

Graduate Ben Rajewski, a starting member of last year’s runner-up team at the state tournament, stepped into the locker room minutes before LHS took the floor for the consolation game against Blue Valley Northwest. Knowing the feeling that crippled the once-buzzing team, Rajewski had just the words the Lions needed to hear.

Rajewski reminded the team of the progress the Lions have made, going from a ragtag group of underclassmen thrown into the fire of varsity basketball, all the way to a resilient family, carrying a 62-10 record during the past three years.

For those seniors, who had felt the weight of loss at state two years in a row, the speech was more than enough.

Stepping into a quiet Koch Arena for the 2 p.m. consolation game against No. 2 seeded BVNW, the pounding of the ball reverberating through the massive arena was music to the Lions’ ears.

Most of LHS’s student section, including a small but true group of seniors who followed the Lions’ success all season, had gone back to Lawrence, deadening the hype that had enveloped the arena a night before.

But this game wasn’t about that.

This game was, for four seniors, a last hurrah. The group of boys bonded together through good and bad. They played together at the state tournament last year, the first time the Lions made it that far in recent history. They suffered through the loss of their coach, Kermit Aldrich, who lost his battle with cancer their sophomore year.

The success of the Lions during the past two seasons, according to the team, had been largely driven by their desire to win a title for Aldrich, but even more so wanting to win for each other.

“It’s been fun, man,” senior guard Anthony Harvey Jr. said. “These guys are my brothers, and I wouldn’t want to spend my time anywhere else.”

Coming off of an 18-2 regular season, the Lions headed into the postseason with a No. 1 ranking and unfinished business. On March 10, the team headed to Wichita State University for the second year in a row to face the top eight 6A schools in the state.

In a word, the team came in confident. All five starters had playing time in last year’s tournament, which was hosted at WSU’s stadium, Koch Arena. Although the 10,506-seat coliseum served as a change in pace from the regular season, the team had the proper experience to settle into its game.

“For me, walking down [during the quarterfinal game], the court was a lot smaller,” senior forward Price Morgan said. “That experience was pretty much irreplaceable.”

The Lions started the tournament out strong, holding off eighth-seeded Dodge City at 4:45 on Thursday. Any jitters the Lions still had were worked out, as the Lions stepped up defensively to win against the Red Demons, 55-46.

The Lions looked to be the better team throughout the contest, but a frustrating 3-2 zone from Dodge City stifled the Lions’ dribble-drive game. The team, struggling to get the ball inside, was dead from behind the arc, making a measly 20 percent of three-pointers. But when the game counted, the Lions did what they did best, surging out to a 15 point led, breathed on the wings of a tight defensive period in which the Lions only allowed 11 points.

Defense, which saved the Lions on Thursday, was the team’s Achilles heel on Friday. Despite a fourth-seed ranking, Wichita Southeast brought out a dynamic duo on the court that overwhelmed the Lions’ defense.

“We didn’t think two players could beat our team, and for the most part that is what happened,” head coach Mike Lewis said. “But, you know, down the stretch we needed to make a few more plays to counter what they were doing, and we weren’t able to do it on our end.”

The Lions held with the Buffaloes for most of the night, but a switch to a 2-3 zone at halftime for WSE and the non-stop scoring from Harding and Barnes proved too much for the Lions.

The fourth quarter is when the Lions began to break down as some shots stopped dropping, physical plays became no-calls and Mallory, the Lion’s best on-ball defender, fouled out with three minutes left. The Lions were outscored 11-27 in the fourth quarter, sending them to the third-place matchup against Blue Valley Northwest.

The Lions were undoubtedly disappointed to not make a return to the state title game, but they knew they still had one more job to do.

“I think you’ve got to go into it the same way and have some fun and play hard,” Lewis said about the consolation game. “You get a great venue to play in, it’s the state championship, you’ve got to play hard and have fun.”

And that they did. The Lions came out victorious against the Huskies, 74-66, carried by their seniors to the very end. The Lions came out on fire from downtown, hitting nine of 15 three-pointers in the first half, with four each from Mallory and senior point guard Justin Roberts.

The barrage didn’t stop there as Roberts, who scored a game-high 31 points and five assists, led the team down the stretch, but also got the other seniors involved.

Harvey swished a three to put the Lions ahead for good after the Huskies cut it down to a two-point deficit with minutes left to go in the fourth. On the next possession, forward Price Morgan sent a BVNW shot ricocheting into the stands to stomp out any hopes of a comeback the Huskies had. Finally, forward Fred Brou was fed an outlet pass out of the team’s press break and finished emphatically, skying up to hammer a two-handed slam down.

The final buzzer sounded, the team shook hands and lined up on the court for medals. The seniors grabbed the trophy and raised it up into the sky, sending the team into theatrics. The team broke it down one final time and walked away into the locker room, for the last time, victorious.

Twenty minutes passed by, feeling like a standstill, until finally, one by one team members left the locker room to meet a crowd of friends and family.

Harvey, the last player to leave the locker room, came out clutching the trophy to his chest, with a larger-than-life smile on his face, inciting roaring applause from his teammates, friends and family standing outside. Hugs were shared, photos were taken, and the trophy made its way to each and every player.

The trophy finally made its way to Morgan, and he grasped it, thinking back over four years of basketball and what it had meant to him.

“It’s meant a lot,” he said. “It’s been such a huge part of my life over the past four years and it just sucks that it is over. I love this school. I’m just glad to have been a part of it and I leave knowing every day I gave my all to it.”