Lions fall to WSE, face off for third place at 2 p.m. against BVNW 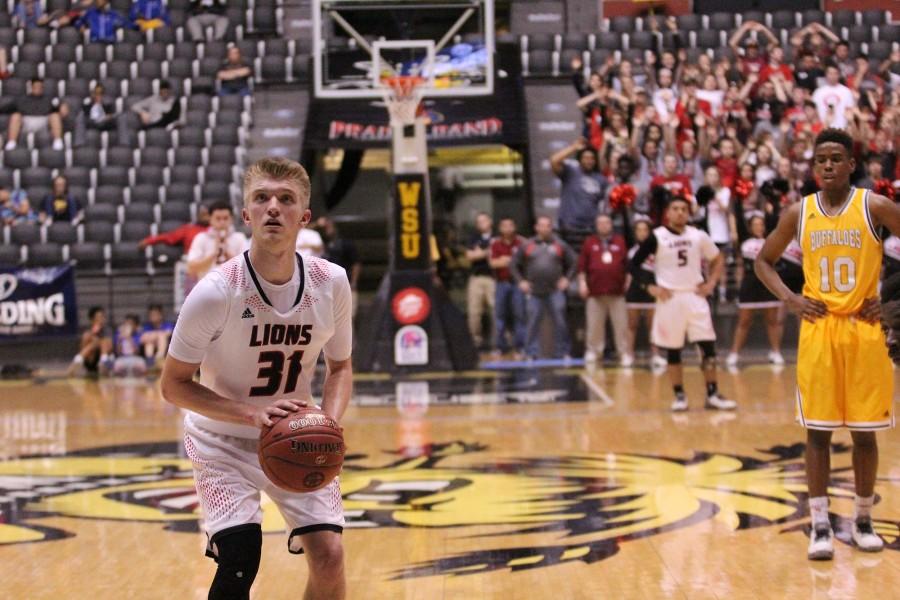 In what was a tale of two halves, the physical attitude of the Lions ended up being their demise in the second half as the team fell short of what would be a second consecutive appearance at the state championship game, losing 61-74 to Wichita Southeast.

In the first half, the Lions set their game up from inside out, throwing the ball inside whenever possible to senior Price Morgan, who proved to be a force inside, totaling twelve rebounds for the Lions.

When the Buffaloes overcommitted to the inside game, it was a kickbout to one of the many outside shooters for the Lions who made just enough shots to set the tone, but also made use of opportunities at the free throw line–shooting a perfect 10 for 10 in the first half.

Coming into the matchup, the Lions had been relying heavily on their strong defensive end to set up the game for their offense, but when it came to shutting down the top players for the Buffaloes, the Lions struggled.

The Buffaloes two highest scoring players, Jerrick Harding and Israel Barnes, sunk a combined total of 66 points. Harding came off a 42-point plastering of Olathe East in the quarterfinals and had the Lions preparing to game plan for them, but the one-two punch of Harding and Barnes proved to be too much for the Lions.

“We didn’t think two players could beat our team, and for the most part that is what happened,” head coach Mike Lewis said. “But, you know, down the stretch we needed to make a few more plays to counter what they were doing and we weren’t able to do it on our end.”

The Lions started strong, maintaining a lead throughout the first half. Seniors Justin Roberts and Price Morgan each had 10 points heading into half, but could not keep with the Buffaloes’ high scoring duo over the course of the game.

The first half ended in the favor of the Lions, who took a five point lead into halftime following a strong defensive stretch lead by junior Jackson Mallory, who added 17 points for the Lions.

Out of halftime, the Buffaloes came out strong, erasing the Lions’ slim advantage and tieing the score up at 36 apiece. The Buffaloes brought another level of physicality in the second half and frustrated the Lions on both the offensive and defensive end with strong play at the rim.

Senior point guard Justin Roberts, who led the Lions with four assists, was forced to leave with three minutes left in the third quarter following a hard foul and the Lions struggled to create much offense without their explosive leader in the backcourt.

Despite the rough play from Wichita Southeast, the Lions managed to hang with the Buffaloes until late in the fourth quarter. They even carried a 50-47 lead into the fourth quarter off a brilliant defensive play and soft toss up at the rim to beat the buzzer from Mallory.

However, the Buffaloes outscored the Lions 27-11 in the last quarter, making five of their last six baskets to close out the game.

The Lions return for their final game of the season today at 2 p.m. versus the number-two seeded Blue Valley Northwest, who fell at the hands of fellow Sunflower League rival Shawnee Mission North, 54-42.