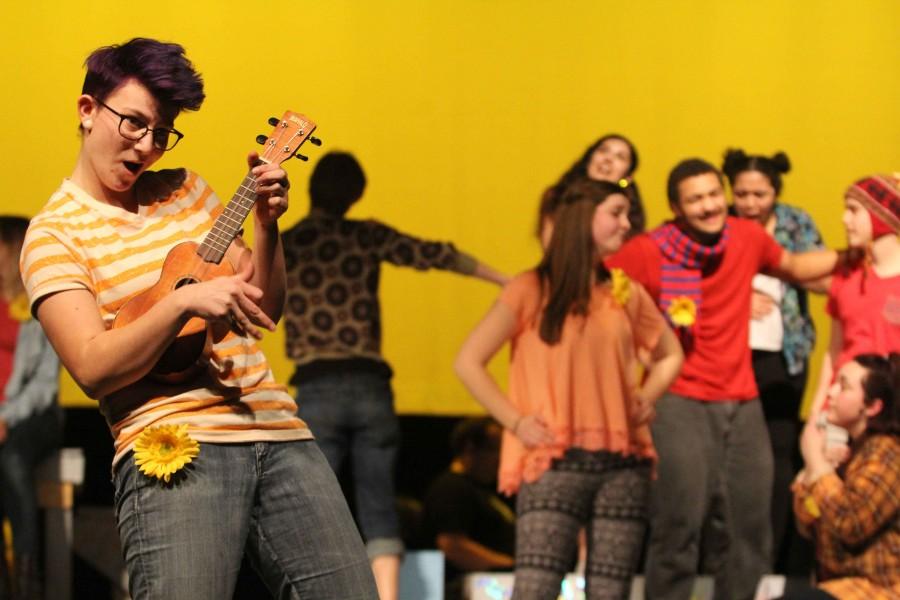 Capitalizing on the modernization of the Bible, students in the theater department took to the stage to perform their second play of the year.

It was also the first time LHS has put on a musical two years in a row.

Despite the common practice of LHS and Free State trading years for putting on musicals, theater director Jamie Johnson and choral director Randall Frye decided to break tradition and put on another musical following last year’s production of Seussical, The Musical.

“Musicals are quite expensive to put on, so we share [funding] with Free State, so this was our off year,” Frye said. “We first off had to do a small musical purely for budget reasons, and then also when we get rights for these shows.”

Ultimately, Frye said he and Johnson would like to direct musicals every year, but under budget constraints, had to start small.

Of the 36 students who tried out for Godspell, only 13 were cast, whereas last year’s musical had 55 students in it.

“It was a huge difference in size,” Frye said. “Thirteen students are on stage the entire time. With ‘Seussical’ last year, you would be on stage for five minutes… These students were on stage all the time. You had to just be present and involved…It was awesome for me to get to work with students as well as other colleagues, and it was just completely different, and I loved it.”

Because of the small cast, students got more time in front of the audience and became a close-knit group.

“It made me a lot more comfortable singing in front of people, and also it helped me meet a lot of new people and all of us have just gotten really confident,” freshman Olivia Rothrock said.

Godspell is a musical about the stories of the Bible in modern day.

The only two named characters from the Bible in the play were Jesus and Judas. The rest of the cast were called by their real names or names from the original script.

“Well Judas and Jesus are the named characters and the rest are just basically people who act as themselves, and so I play a person named Lemaur but no one calls me Lemaur,” sophomore Gavin Jones said. “They can call me by Gavin or Lemaur, it doesn’t matter, but I just play kind of a goofy character.”

Godspell was written in the ‘70s by Stephen Schwartz, some may know him as the writer of “Pippin” and “Wicked.”

“Godspell kind of developed into a show based on using the Bible as a base for literature. They chose to set literature from the Bible, specifically from Matthew, they chose it as literary work, and that’s what they set the music to,” Frye said.

Despite the religious themes, Rothrock said the play could be related to by everyone.

“I think because it’s just really fun and if you’re not religious, it’s not really about religion, it’s about a group of people coming together, and they’re united by something common we all have, but also we’ve worked really hard on it,” she said.

For a majority of the cast, “Godspell” was one of the greatest productions to take part in.

“Because we worked really hard on it, it’s really meaningful,” Jones said. “It’s probably been one of the best musicals I’ve ever been in.”