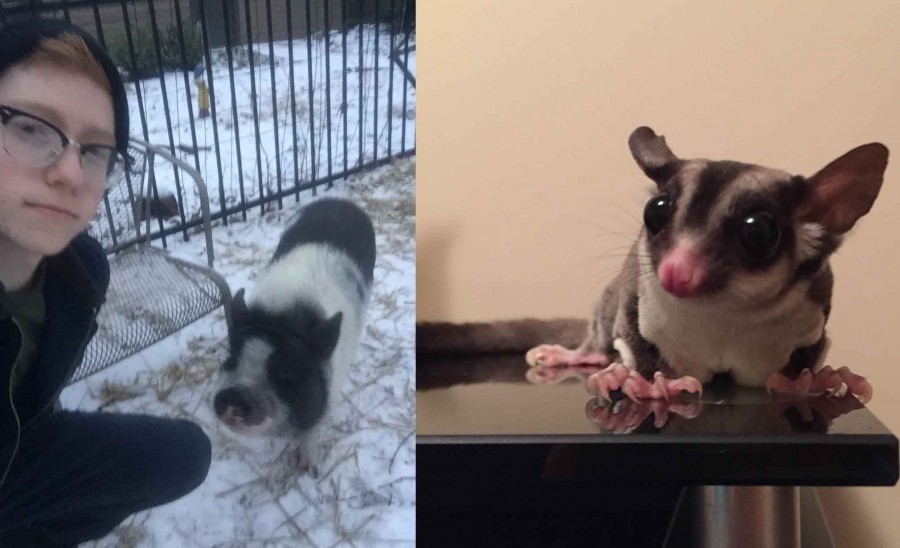 When most people think of household pets, they think about dogs or cats. However some students may think differently.

From sugar gliders to pot-bellied pigs, a couple students have different ideas of what a normal domestic pet is.

Junior Skylar Drum owns a sugar glider named Shasta. A sugar glider is a small nocturnal gliding possum, which is similar to a flying squirrel. Sugar gliders can glide up to 45 meters. Taking Shasta around town  is one of Drum’s favorite things about owning a sugar glider.

“I get to take Shasta places like the movie theater, sometimes school, and the grocery store,” Drum said.

Drum’s sugar glider is just as active as any other domestic pet.

“She jumps all over the place,” Drum said.

Connor takes care of Puja just like another person would take care of a dog. She has similar outside habits and behaves like his dogs.

“She stays outside mostly, but if it’s cold she’ll come inside and she makes a nest with blankets that she finds,” Connor said. “Then she sleeps for the rest of the day.”

Like any other pig, Connor said his pig causes occasional frustrations.

“They get into stuff and eat all your food if they have a chance,” Connor said.

Pot-bellied pigs and sugar gliders are closer in similarity to dogs and cats, and could soon be just as popular as dogs and cats are today. Getting surprised looks for having a strange animal is common for these owners, but it is part of the fun of owning unusual pets.

“I get to tell people about [Shasta] and show people how she jumps,” Drum said.