Aside from work, school, and extracurriculars, students make time for play 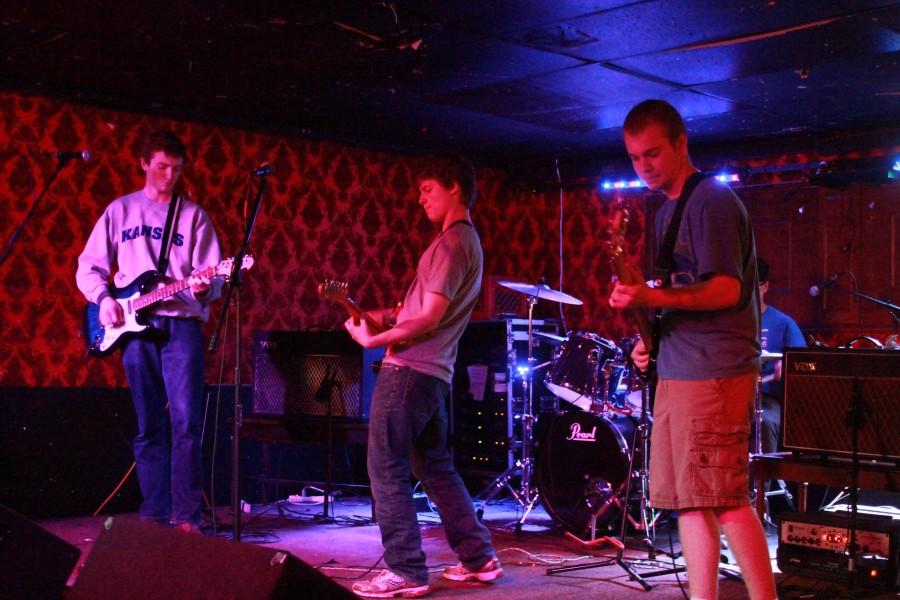 Seniors Trevor Hall, Keegan Matheis, and Izaak Workman play a show at the Jackpot on Feb. 14.

Seniors Izaak Workman, Keegan Matheis and Trevor Hall make up three-fourths of the alternative rock band Technology of the Sun. The band was formed by Workman, Matheis and Hall in the fall of 2013. Free State student and drummer Tyler Darnall makes up the missing piece.

Aside from working at Dillons, members practice whenever they can at either Matheis’ or Hall’s houses.

The band has played several shows, predominantly at the Jackpot Music Hall, and hope to play more this summer.

How is it coordinating practices with work and school?

IW: “It’s really hard. We all have different work schedules obviously, and we all do extracurricular stuff, choir and band and orchestra. So sometimes we practice only once every two weeks, and it’s really hard.”

KM: “I guess time. Usually we can only get about 30 minutes in because somebody has to get to work in an hour or so. So usually just finding enough time to practice [is the hardest].”

How did the band start?

TH: “We were really just a friend group that played music together for a while, until finally we got a hold of a drummer. Once we had a drummer we started getting gigs and officially became a band.”

IW: “The two guitar players and I decided we wanted to be in a band, and so we started playing together and recording and stuff, then we looked for drummers.”

KM: Well, we just kind of started writing and recording music, just kind of as friends. And then we didn’t actually start playing live, we just recorded stuff, and then it was just me, Izaak and Trevor. And then we started trying to get a drummer and setting up gigs and stuff.”

How will you continue making music after high school?

TH: “We hope to continue making music because all of us will still be living in Lawrence.”

IW: “We’re all going to stay here in Lawrence, so we’ll probably just continue being in a band. I’m going to Washburn, and I’m going to do music education.”

KM: “Just play a lot of gigs. We should all be going to KU. Oh wait, Izaak is going to Washburn, but he’ll still be in town.”